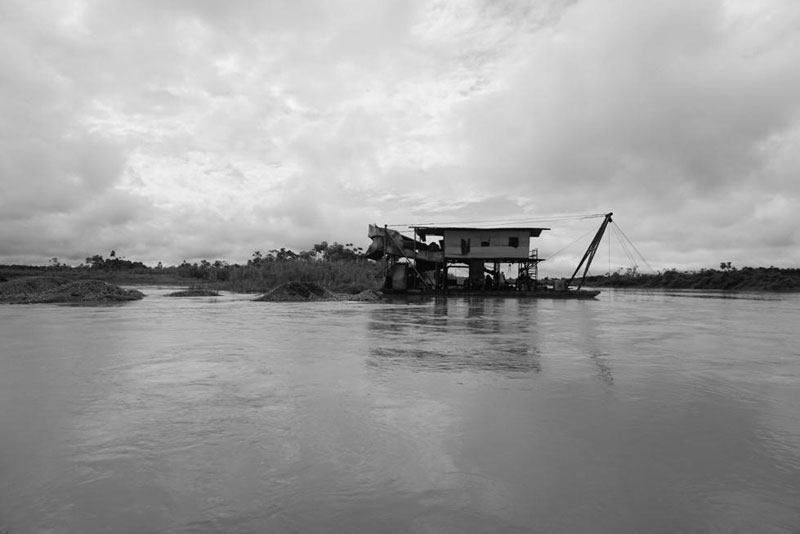 29 Jun Rights of nature: where to start researching?

Since the Colombian Constitutional Court issued judgment T-622 of 2016, in which it recognized the Atrato River as a subject of rights, the question of the rights of nature has convened academics in different disciplines to think about the consequences that this has. On the one hand, for the legal system, and on the other, in the communities that co-inhabit with these new legal subjects. Felipe Clavijo, a constitutional lawyer who participated in the drafting of the sentence, asked before a panel at Universidad del Rosario in Bogotá, in February 2020, “What is the revolution that is being proposed?”. As he continued, he explained that “the potential of the declaration of nature as a subject of rights is transitory, not the final solution”, referring to the need to transform the relationships that we maintain today with nature. However, what should be the role of law in this transformation? This is not only a conceptual question, since the way Felipe approaches it leads us to the discussions on the nature/culture divide that feminists have raised since the 70s with important contributors to this discussion such as como Sherry Ortner (1972), Marilyn Strathern y Carolyn  MacCormack (1988), and Donna Haraway (1992). Without a doubt, the challenge from the legal point of view is to integrate other non-humans into a language of rights, which definitely implies a transformation of concepts. However, this is also a methodological question: where to start doing resercah on the rights of nature?

My field research has been an opportunity to explore this last question. As a lawyer and anthropologist I am convinced that the field must guide the conceptual approach. This is why I will begin with an ethnographic moment from which the proposal of this text arises: begin by asking ourselves about the role of the commons. This question does not necessarily direct us to the rights of nature, but precisely that is the opportunity it presents. It does not imply the existence of rights, but begins with the commons that are where rights are preached upon.

The river as a common

One afternoon in 2017, on the banks of the Atrato river, I observed how a woman in her twenties, half body in the water, washed her clothes in the river. Beside her, two girls of no more than ten years old jumped into the water, let themselves be carried by the current, and went out to jump into the water again. Standing in a quiet canoe on the riverbank, two young women hooked small fish from the river, which other friends then picked up and prepared in a bucket. And in the middle of them all, a girl of no more than two years old walked and played alone on the banks of one of the largest rivers in the world. The image of the girl alone led me to think about my children and the playgrounds in Bogotá where there is one caregiver per child. The image surprised me so much that I asked Father Sterlin, vicar of the Diocese of Quibdó, who was taking care of the girl. Father Sterlin has been a standard-bearer for the sentence, carrying it along the river along with his religion. In addition to accompanying the guardians of the Atrato, he has created groups of youth and child guardians, and has inspired them to be the new generations of protectors of the river. Not only does he have his childhood memories on the banks of the river, but he has seen this river transform in multiple ways over the years. So he did not feel the same surprise when I saw the girl because as he explained, she was not alone. On the contrary, everyone took care of everyone, that is what community life is all about. 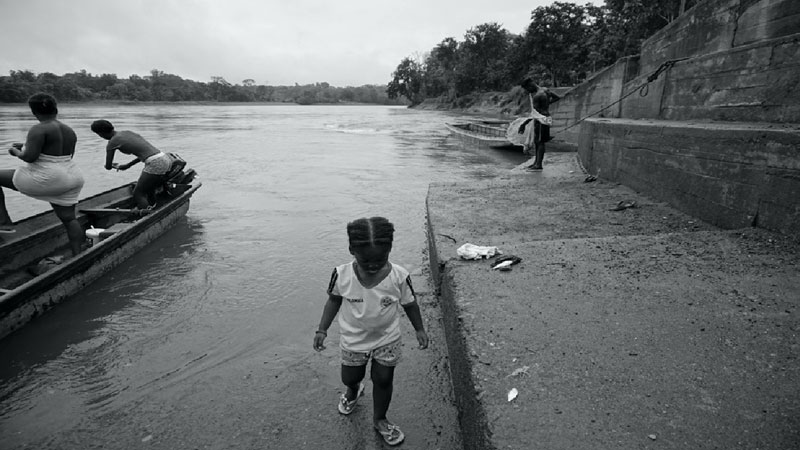 This scene made me understand that the river was not only a source of food, or a route to get around in Chocó. It was also the place where people have fun, do their housework, and where bonds of union, protection and care are built. And in this sense, with everyday acts, a common river is built. As Marisol de la Cadena and Mario Blaser (2017) point out, the common is a practice, it is something that is being produced. It does not exist out ther, it is not a given, as the legal idea of common good makes us belief. On the contrary, it is from the relationships that we build with other humans and non-humans that the river becomes a common.

Thus, contradictions were also present. In addition to this image of the river as everyone’s place, you could also feel the transformations in the river from the work of dredges used for gold mining. Father Sterlin explained to me that with the sedimentation of the river the way its waters flow has been transformed and so a house on the riverbank was under threat of one day overflowing. Its banks have also been replaced by stones instead of dense vegetation. And the fish that are consumed everyday carry high levels of mercury. 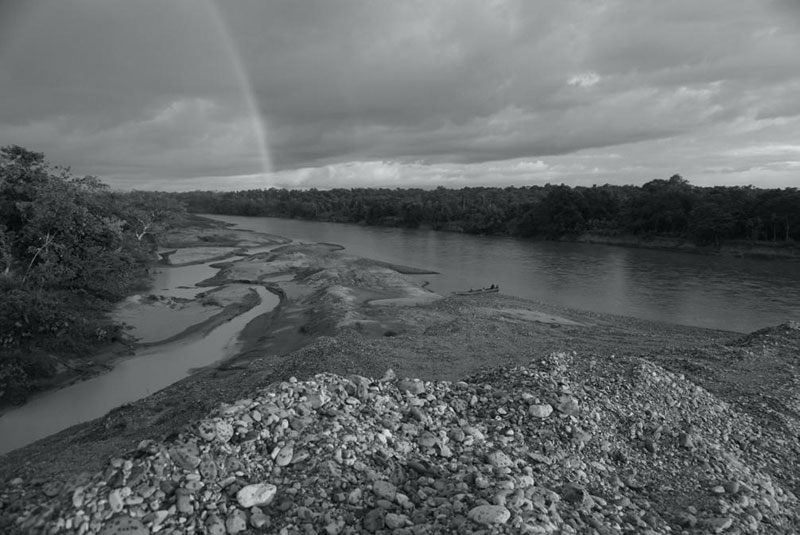 Atrato river. Stone banks and not forest. December 2017. Photo by the author

Divergences are also part of the common

The common river was therefore built from different actors who do not necessarily maintain harmonious relationships. Mercury, dredgers, stones, but at the same time, fun and care, they all make part of this river. In “The Uncommons” (2017) Blaser and de la Cadena point out that what is common is not what is equal to all, but is maintained on their differences. In this particular case of the Atrato river, it was the presence of mercury contamination that had led the Court to guarantee the rights of the river and is on this contradiction that rights subsist.

The uncommons not only make the harmonic visible, but allows us to think how divergences allow the construction of different forms of the common. Now, with regard to the rights of nature, this approach makes visible what gets articulated when talking about the rights of nature. In this sense, it will also be the divergent that we must take into account when doing research in this field.

Thus, it is important to acknowledge how relationships between humans and non-humans make common something that is not common to everyone’s interests, but still, of which all make part. Perhaps a revolution is not necessary as Felipe Clavijo points out, maybe all that is required is to ask different questions. Start by asking ourselves, for example, about those divergences or contradictions that are part of this form of rights. Which actors have more agency than others. For example, mercury has proven to be an actor with high visibility not only in national politics but also in international politics. The 2013 Minamata agreement is proof of how this non-human actor has been part of the international agenda for a long time. And then in Colombia, it has had an impact on the works of judges, organizations, academics and institutions, such as in the case of the Atrato River. Mercury was able to put at the center of institutional activity a region that has been historically forgotten. Now we have the challenge of thinking how other agents, human and also non-human, can generate new transformations in this common river.

Dredger on the Quito river, tributary of the Atrato river. August 31, 2017. Photo by the author

After the celebration comes the investigation. It is time to start researching what these new subjects of rights mean and what they produce

We lived a great celebration those days in 2017 after the declaration of the Atrato river as a subject of rights. And still, the dredgers were working to remind us that they were also part of what we were experiencing. With the new declarations of rights by other judges in Colombia such as the Colombian Amazon, the Pisba paramo, the Magdalena river, La Plata river, and the Coello, Combeima and Cocora rivers, it is time for us to stop and think about the terms and forms that the rights of nature take in the different territories. Who participates in the construction of these rights? Human and non-human actos. We are seeing for example climate change (Judgment declaring the Colombian Amazon a subject of rights) or also, the unhealthiness of water (declaring the Magdalena River as a subject of rights) as arguments for new declarations. Is it perhaps a way to talk about conservation, without people? At the hearing before the Constitutional Court for the case of the Pisba paramo, I could see the worried faces of peasants whose presence in the wasteland is not compatible with the new subject of rights. And in this sense, how does law transform human-nature relations?

Hence the need for ethnographic or empirical exercises that observe in the field how these declarations of the subjects of rights take shape and what they produce is becoming everytime more pressing. How about start resercahing making different questions? I propose looking into how commons (uncommons) are built: paramo, Amazon, river. The scenery of the paramo is undoubtedly very different from that of the Atrato river, despite the fact that the legal figure used is the same. And the relationships that are built with nonhumans are also different. What we need is to begin to make visible how the different actors of this new figure of law participate in putting together nature as a subject of rights.

About the Author: Lawyer and anthropologist from the University of Los Andes (Colombia) where she is currently pursuing a doctorate in anthropology. Her research questions are located at the intersection between law and society, using the ethnographic method as a research methodology. Currently her question includes an approach to science, using science and technology studies as a conceptual framework to address questions from other angles, in particular, the role of non-humans and their participation in the production of legal forms

The full video of the seminars of Young researchers on “Nature and its Rights” is available here: rivers-ercproject.eu/media